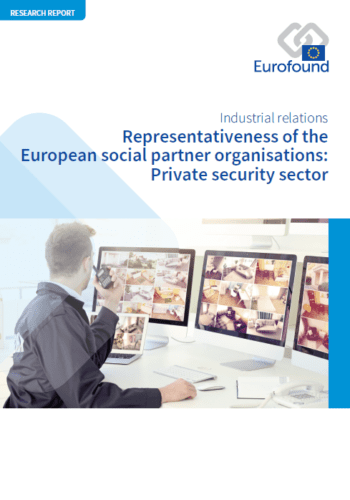 The purpose of the study was to identify the relevant national and supranational social partners (the trade unions and employer organisations) in the private security sector and show how they relate to the sector’s European-level organisations representing employees and employers. Their relative representativeness legitimises their right to be consulted, their role and effective participation in the European sectoral social dialogue and their capacity to negotiate agreements.

The final report of the study, which can be downloaded on the right, is divided into the following three parts:

The report concludes that the Confederation of European Security Services (CoESS), representing employers, and UNI Europa Private Security (UNI Europa), representing employees, are the most representative European-level social partner organisations in the private security sector. According to the report, both CoESS and UNI Europa have proved their capacity to negotiate on behalf of its members and to participate in and contribute effectively to the European sectoral social dialogue. UNI Europa is also the only sector-related organisation at the European level with sector-related trade unions affiliated.